The company’s VentSaver HD (heavy duty) has been an enormous hit for protecting vent pipes and chimneys across the country. However, it isn’t easy to install if you have a standing seam roof. With the VentSaver EZ model, you no longer have to worry. 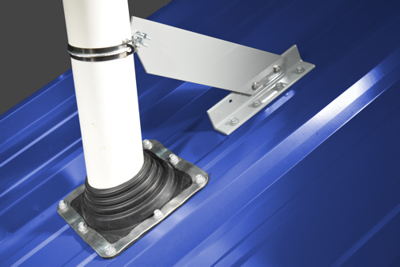 Go to http://wlfpk.co/F6qs6D_7 for more information.

The VentSaver EZ was developed to simplify the installation of the company’s vent protection systems and to be suitable for your standing seam roof. The solutions provide you with reinforced protection for your vent pipes, chimneys, and masts, which can be subject to crushing forces when your roof is covered in snow and/or ice.

So, where did this innovation come from? The advent of metal roofing in the 1970s created new concerns surrounding sliding snow and ice. SnoBlox-SnoJax first developed a snow guard system due to the lack of suitable, non-corrosive products. With the introduction of standing seam floating roofs in the 1980s, the company further developed its snow guard range using adhesives instead of screws.

The current range of VentSaver vent guard systems was conceived in the early 2000s due to the company’s snow guards being incorrectly used to protect vents and chimneys. The first product, the VentSaver HD, offered you a screw-down solution that could prevent your vent stack pipes and chimneys from being crushed by sliding snow.

While it was super popular, it wasn’t suitable for standing seams. With the latest iteration, the VentSaver EZ, you’ll find the same elegant solution as the heavy-duty model. However, the new model also gives you a non-penetrating attachment, so you can install it anywhere without worry.

The company’s first screw-down, non-corrosive, polycarbonate snow guard reached the prototype stage in 1976. Named SnowJax, the product has since been patented and remains in production today. SnoBlox-SnoJax has continued to develop innovative new snow guard products as the metal roofing industry has evolved, with several additional patents now being held.

A company representative recently stated: “Vent pipes and chimneys are one of the most commonly damaged items caused by sliding snow and ice on sloped metals roofs. Our VentSaver products are metal roof snow protection devices that were specifically designed with the vent pipes, chimneys and roof masts in mind.”

Why wait until winter to discover your vent pipes need protection? With the range of VentSaver devices from SnoBlox-SnoJax, every roof can now be protected.

See the full range today. Check out http://wlfpk.co/FBPNJroE so you can learn more.